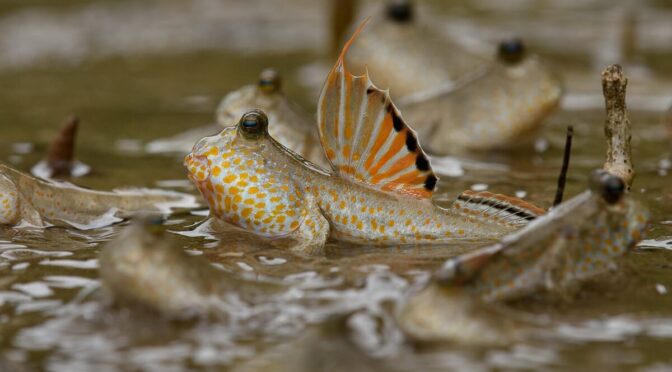 WHAT IS an animal that walks on mud, breathes through its skin, and swims using fins? A mudskipper! While they are fish and classified in the fish family Gobiidae, mudskippers don’t quite look like one.

Unlike almost every other fish, mudskippers spend much time out of the water. Through evolution, they have changed their bodies and behaviours to live on land as well as they do in water, says freshwater ecologist Khaironizam.

To start with, mudskippers walk, hop and skip on land. That is an adaptation to their peculiar living environment on the mudflats.

While fish commonly use pectoral fins – the first pair from the front – for balance in swimming, mudskippers use theirs for paddling and walking on the ground.

That’s not all. The Giant Mudskipper (Periophthalmodon schlosseri) even uses its pelvic fins – the pair underneath – to cling onto plants during high tide, says Khaironizam.

During low tide when the mudflats are exposed, mudskippers are one of the many animals that pop up to search for food and mates, as well as to defend their territories.

As they spend most of their time on land during low tide, mudskippers have evolved to breathe through their skin, mouth and throat.

These are moist and lined with a network of fine capillaries under their skin. They help oxygen to diffuse into the blood and carbon dioxide out, says Khaironizam.

And if you look carefully at the sides of a mudskipper’s mouth, you would see large cavities. These let them expand their gill covers as large as possible to increase air diffusion.

Mudskippers gulp air into their cheeks to retain more oxygen when living on land.

Mudskippers also eat on land despite feeding on small insects in the water during high tides.

Mudskippers emerge from their burrows to prey on small crustaceans like fiddler crabs when the tide goes low. They also graze on microscopic algae called diatoms on the mudflats.

While they see badly in water, mudskippers have good vision on land, which they use to hunt.

To keep their eyes moist when out of the water, they occasionally roll the eyes to the back, which makes them the only fish with eyelids that can blink!

When mudskippers want to hide and lay eggs, they retreat into their burrows, to protect themselves from predators. The problem though, is that oxygen is scarce inside the muddy tunnels.

But mudskippers have a solution.

Khaironizam shares that they would gulp air above ground, then carry the oxygen in their gills into the burrow where their eggs are and release it there.

All the mudskippers’ hard work doesn’t help just themselves. When they dig burrows, they aerate the muddy soil, which helps mangrove roots absorb oxygen too, says Khaironizam.

As such, mudskippers are also bioindicators that scientists can use to monitor the levels of pollutants in mangrove ecosystems.

And when they graze on the mud, they unintentionally pick up heavy metals through their gills, skin, to the muscle tissues, liver and digestion system – that helps clean up the soil.

Lucy Wong (@lucy_cfc) is a Macaranga Sprouts journalist. We thank the supporters of the Sprouts initiative who made this story possible.

Back to: ECOSYSTEMS PAGE

This is where we feature the various ecosystems in Malaysia. From cloud forests to coral reefs, these are the rawest reasons we do environmental journalism. For each ecosystem, we tell the stories of not only the natural living and non-living components of these communities and systems, but also the human ones. Here, you can explore natural Malaysia in text, voice and photos, guided by the experience of those who know it well.

Living between sea and land are mangroves (‘bakau’), protectors of coasts, ‘reclaimers’ of land, nurseries for fish. Its biodiversity and ecosystem roles are larger and more complex than meets the eye.

Popularly known as limestone ('batu kapur'), Malaysia's remarkable karst landscape has been sculpted by centuries of action of water on soft rock. It is also home to unique life-forms and is part of human life.

Read Macaranga's tribute to him on our blog.

< The tabling of the Wildlife Conservation Amendment Bill 2010 on 11 October was definitely a highlight of October, so it headlines our wrap-up. We look back in October at this and other issues. Our monthly wrap-up discusses environmental news and issues of the month that was. Every last Monday of the month 3.30pm-ish on 'Earth Matters', BFM Radio 89.9.

We cover the environment (mostly out of our pockets). Our stories are free to read. No ads, no fees. Now, we need your support to keep going (stronger).

Be a Macaranga Supporter