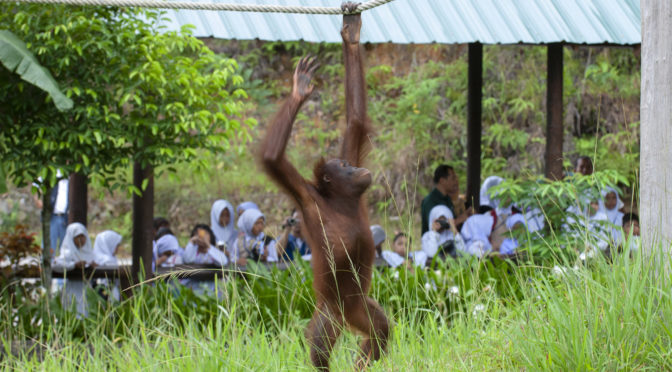 Malaysian zoos lost almost all their income due to the Covid-19 crisis but were kept afloat partly by public donations. Was it worth Malaysians giving them millions? This is the first of the two-parter on zoos and aquaria in Macaranga’s Taking Stock series.

IN APRIL, the horrific possibility of animals from elephants to slow lorises starving to death behind bars, shocked Malaysians.

As is the case world-over, zoos and aquaria in Malaysia are heavily dependent on income from visitors. This income vanished overnight when Malaysia implemented measures to contain Covid-19.

The strict movement control order (MCO) that began on March 18, 2020 shut down all public venues, indefinitely at the time.

(Photo: Zoos’ revenues were hit hard during the pandemic, spotlighting the role of these parks in wildlife education and conservation. Pic by Cede Prudente)

Zoos and aquaria lost as much as 98% of their funding, says Dr Kevin Lazarus, chairman of the Malaysian Association of Zoological Parks and Aquaria (MAZPA).

Within two weeks of the MCO, parks began making desperate pleas for funds.

“It’s unprecedented that there was completely no revenue,” says the zoo director and veterinarian of 30 years. “Most zoos found they had funds only for three to four months. One or two were in real difficulty.”

The Malaysian federal government doesn’t fund zoos. Their conservation centres though, receive government funds, and during the MCO, faced no issues feeding animals or paying salaries.

For conservationists, the Covid-19 crisis exposes the fragility of the funding model of zoos and therefore, their ability to care for their animals.

“I think zoos have to be held to account. Them asking for funds from various sources is a failure on their part.

“They can’t survive on their own for a few months; what will happen should the restrictions last for much longer?” says a conservationist who declined to be named.

But, as Kevin says, this is unprecedented. The same crisis affected zoos worldwide.

In Germany’s Neumünster Zoo, keepers drew up a list of animals to slaughter if funds ran out. Likewise the Bandung Zoo in Indonesia were ready to slaughter their deer to feed the carnivores.

Meanwhile, the British and Irish Association of Zoos and Aquariums had to pressure the government through Parliament to allow parks to re-open “or many will not survive this crisis.”

In Malaysia, parks do not publish their finances and it is unclear how much it costs for them to operate.

As of this year, the federal government has licensed 14 zoos and 20 permanent wildlife exhibition centres in Peninsular Malaysia (see map) and estimated that it costs these parks RM8 million a year to operate.

The licenses are issued by the Department of Wildlife and National Parks Peninsular Malaysia (PERHILITAN).

However, among these licensed zoos, Zoo Negara alone says it needs about RM1.2 million a month to operate. This is the country’s largest park, home to over 5,000 creatures.

In any case, parks’ appeals for funds reached all and sundry thanks to generous media coverage.

The parks themselves went into social media overdrive with adopt-an-animal posts and by inundating netizens with videos of gamboling tapirs, talking birds and Selamat-Hari-Raya-we-miss-you greetings from orang-utan.

Malaysians responded in cash and kind. Millions of ringgit flowed in.

Zoo Negara has been a particularly successful recipient. This is likely due to the widespread assumption that it is the national zoo—as its name indicates; the 57-year-old park is actually run by the non-profit Malaysian Zoological Society.

Zoo Negara raised almost RM3 million in donations as of 7 May. Animal adoptions got a boost through the new easy-to-use payment channels of ticketing outfit Ticket2u and online shopping giant Lazada.

In addition, fresh produce that would have gone to waste found a happy home at the zoo. This included tonnes of vegetables and unsold produce from food supply chains disrupted by the MCO, and consumable produce seized by the Malaysian Quarantine and Inspection Services.

Some relief all round

Other parks are experiencing similar though smaller amounts of relief.

However, Kevin points out that what has been key has been government aid.

MAZPA, which represents 22 parks, reached out to the Ministry of Energy and Natural Resources for help.

The Ministry responded by pledging to help zoos with the costs of food, medicines and sanitation till the end of the year.

Zoo Negara received a RM1.3 million government grant “as an initial step”, as the government put it.

Kevin says other parks are receiving grants based on their respective needs. Kevin notes that staff salaries are being subsidised by the federal government’s Covid-19 Bantuan Prihatin special aid package.

Three months after the MCO implementation, Covid-19 appears under control. As Malaysia carefully eases out of the MCO, the hope is that visitors will once again throng the parks.

Kevin is confident the sales of tickets and food and beverage as well as venue rentals will be able to cover operational costs again by year end.

In Part 2 of our focus on Malaysian zoos and aquaria during the pandemic, we look at the roles these parks play in wildlife education and conservation.

This feature has research done by Darshana Dinesh Kumar and contributions from naturalist/photographer Cede Prudente. Darshana also worked on the map which features icons made by Freepik from www.flaticon.com.

Reporting for this story was supported by Internews’ Earth Journalism Network.

This is part of Macaranga‘s series, ‘Taking Stock’, where we examine how environmental sectors in Malaysia are responding to Covid-19 and a new federal government.

This is where we will feature the various ecosystems in Malaysia. From cloud forests to coral reefs, these are the rawest reasons we do environmental journalism.

For each ecosystem, we tell the stories of not only the natural living and non-living components of these communities and systems, but also the human ones.

Here, you can explore natural Malaysia in text, voice and photos, guided by the experience of those who know it well.

Popularly known as limestone (‘batu kapur’), Malaysia’s remarkable karst landscape has been sculpted by centuries of action of water on soft rock. It is also home to unique life-forms and is part of human life. We celebrate its myriad facets in our first ecosystem spotlight.

IT’S BEEN a super October for us: new commentary section; new newsletter; new contributing writer. Also, check out our Monthly Wrap-up on BFM 89.9.