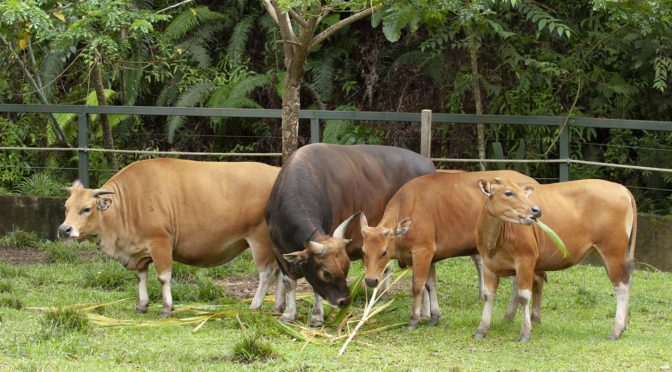 With huge income loss during the Covid-19 crisis, is it time to look at the role that Malaysian zoos play in wildlife conservation? This is the second of the two-parter on zoos and aquaria in Macaranga’s Taking Stock series.

WITH THE Covid-19 pandemic under control, zoos and aquaria in Malaysia might have averted a funding crisis for now. However, the question remains as to why wildlife is kept captive in the first place.

(Photo: Endangered animals can get a lifeline in zoos, such as these Banteng Bos javanicus in Lok Kawi Zoo, Sabah. Pic by Cede Prudente)

However, the rise of the local conservation movement in the 1970s has prompted demands for these parks to evolve beyond mere exhibition space.

Dating zoos: The notion of a zoo emerged in London almost 200 years ago and the London zoo is still running. In Malaysia, the first zoo was built in Johor, over 90 years ago in 1928 and it too, still operates.

“If a zoo doesn’t think about the wild relatives of the animals it is keeping, what makes it different from a circus, where people pay to see a spectacle?” asks a conservationist who asked to remain anonymous.

“If all you do is tell people that lions are 6 feet long and have 2 cubs a year, that’s just information. Modern zoos need to find legitimacy by highlighting the fact that these animals exist in the wild.

“And if they are in trouble in the wild, something is being done about it. Otherwise, it’s just a business.”

In Malaysia, ‘exhibition’ does not even figure in Department of Wildlife and National Parks Peninsular Malaysia (PERHILITAN)’s definition of the roles played by zoos and aquaria.

Instead, the roles mentioned are “research, education, training, conservation and recreation” but with the caveat that “the functions that each park is able to fulfil depends on its available facilities and expertise.”

There is a holy grail of functions whereby parks can serve conservation, says Dr Kevin Lazarus, chairman of the Malaysian Association of Zoological Parks and Aquaria (MAZPA) (see below).

How zoos and aquaria can serve conservation

While all these functions are yet to be fulfilled by local zoos, Kevin says the easiest to implement is conservation education, which “all parks do”.

Certainly, in Malaysia where 70% of the population live in towns and cities, their value for nature education is undeniable.

“This is especially so if there are not many alternatives to appreciating wildlife.”

Kevin agrees. “There’s nothing like being able to experience animals first-hand. Of course, if you can see them in the forest, it’s better. But how many people can go to the forest?

“And when you are there, the chance of actually seeing wild animals is actually very low.”

In educational outreach, a minimum is good signage, he says. MAZPA is encouraging its members to list animals’ wild habitats and their endangered status. “Of course, everyone can improve; at the end, it is up to the parks.”

But active educational programmes are more effective, he finds. In Taiping Zoo and Night Safari, of which he is a director, this is borne out in the heartening responses to classes and guided tours for students and adults.

“When people stand in front of a tiger exhibit and the tiger suddenly jumps into a pond, they are startled because they think cats can’t swim. It’s a chance to tell them more and increase their appreciation of the wild animal.”

The management of Malaysian zoos and aquaria has come a long way, says Kevin.

The linchpin to this was the 2010 revision to the Wildlife Conservation Act and the accompanying 2012/2013 regulations, which specifically address park licensing and management.

Thereafter, parks were given two years to comply to regulations or close down.

“So from seven to eight years ago, we started seeing improvements,” says Kevin.

“Now, in terms of the size of exhibits, all have complied. They are focussing now on layout and landscaping – every park should be doing this – as well as good signage and educational activities especially for schools.

“We don’t allow animal shows any more – the focus has to be natural behaviours and education.”

Even during the pandemic, PERHILITAN as the park licensing agency for Peninsular Malaysia, asserts that park operational regulations and the Act were adhered to by the licensed parks, particularly in terms of animal welfare.

“There are … instances where some of the trafficked wild animals (that have been rescued by authorities) cannot be released and zoos become a useful home for them and their wild genes. The keeping of these animals forms an insurance (against the loss of wildlife).”

Malaysia’s National Policy on Biological Diversity 2016–2025 recognises zoos and aquaria as ex-situ (not in the wild) conservation solutions. Specifically, they are part of the strategy to ‘safeguard key ecosystems, species and genetic diversity’.

“Although the preferred way of conserving wild species is within healthy natural habitats,” states the policy, “we need to acknowledge that not all species or varieties of animals and plants can be guaranteed to survive under current conditions in their natural habitats.”

The policy adds that it is crucial that “all zoos and wildlife parks are managed to a high standard, safeguard animal welfare and promote conservation”.

According to Malaysia’s latest national report to the Convention on Biological Diversity (4 March 2020), progress on endangered species conservation targets has been made “but at an insufficient rate”.

Specifically, these are targets to conduct conservation assessments of plant and animal species and to enact legislation to protect endangered and threatened species.

However, the report highlights the success of government wildlife rescue and captive breeding programmes to rehabilitate threatened species.

In Sabah and Sarawak, the report singles out the rehabilitation programmes for the iconic and critically endangered Borneon orangutan (Pongo pygmaeus).

Around 150 animals are being rehabilitated respectively by the Semenggoh and Matang Wildlife Centres, run by the Sarawak Forestry Department, and the Sepilok Rehabilitation Centre, managed by the Sabah Wildlife Department.

No figures were available for each species but these include the Gaur (Bos gaurus hubbacki) and the Malayan tiger (Panthera tigris jacksoni), both of whose populations are estimated at a mere 150–200 in the wild.

These programmes are carried out in PERHILITAN’s 11 Wildlife Conservation Centres and 2 Wildlife Rescue Centres as well as in government and private zoos.

The report’s highlighted breeding programmes are largely carried out by wildlife conservation centres – different from zoos – whose role it is to rehabilitate wildlife.

However, PERHILITAN emphasises that zoos are “important partners” in its breeding and rescue programmes.

“As the agency responsible for carrying out wildlife conservation activities, we take the approach of cooperating and sharing expertise with parks to help us carry out programmes.

“As such, we are of the opinion that the existence of zoos and permanent exhibits are relevant and play important roles in supporting the department’s efforts in conservation…”

PERHILITAN adds that besides being actively involved in wildlife breeding, parks also house wildlife that has been given up by the public, injured, seized or born in captivity with the department’s permission.

In addition, the parks help with the animals’ rehabilitation process before the department releases them back to suitable habitats; those with permanent injuries and cannot return to the wild, becoming “ambassadors for public awareness”.

Taiping Zoo alone has successfully bred 14 endangered species. The breeding programme of one of these, the Milky stork (Mycteria cinerea) goes back to the 1990s, says Kevin, giving the zoo decades of scientific data and experience on breeding and reintroducing them to the wild.

According to this year’s country report to the CBD, while the government remains the major source of funding for biodiversity, species conservation as a whole “faces challenges of securing consistent funding”.

Conservation and other environmental sectors have traditionally not been a priority for the government of Malaysia. For example, in Budgets 2019 and 2020, the federal allocation specifically for biodiversity was around RM60 million out of around RM300 billion—a mere 0.0002%.

Addressing this will go a long way in helping wildlife conservation in all its forms. That includes boosting the roles played by zoos and aquaria.

“It would be hypocritical to completely ignore the viable conservation solutions offered by zoos,” says the conservationist. “And I must give credit to many zoos who have created ways to fund themselves or have managed to get grants.

“But zoos and authorities must ensure there is a sustainable financing plan prior to operations. Arguably, the fate of current captive individuals and potential future ex-situ programmes to save their wild brethren, are at stake.”

Malaysia has had to navigate had at least four major financial or health crises since 1997. As this crisis is being wrestled under control, are parks ready to build more resilience against such future shocks?

Not yet, say park operators. Currently, they have their hands fully tied with fund-raising and enticing visitors back. Other models will have to wait.

This concludes our 2-parter on Malaysian zoos and aquaria during the pandemic. Part 1 looked at the financial impact on these parks and how they dealt with them.

This feature has research done by Darshana Dinesh Kumar and contributions from naturalist/photographer Cede Prudente. Darshana also worked on the map which features icons made by Freepik from www.flaticon.com.

Reporting for this story was supported by Internews’ Earth Journalism Network.

This feature on zoos and aquaria is part of Macaranga‘s series, ‘Taking Stock’, where we examine how environmental sectors in Malaysia are responding to Covid-19 and a new federal government.

This is where we feature the various ecosystems in Malaysia. From cloud forests to coral reefs, these are the rawest reasons we do environmental journalism. For each ecosystem, we tell the stories of not only the natural living and non-living components of these communities and systems, but also the human ones. Here, you can explore natural Malaysia in text, voice and photos, guided by the experience of those who know it well.

Living between sea and land are mangroves (‘bakau’), protectors of coasts, ‘reclaimers’ of land, nurseries for fish. Its biodiversity and ecosystem roles are larger and more complex than meets the eye.

Popularly known as limestone ('batu kapur'), Malaysia's remarkable karst landscape has been sculpted by centuries of action of water on soft rock. It is also home to unique life-forms and is part of human life.

Read Macaranga's tribute to him on our blog.

In our August Monthly Wrap-up, we remember conservationist Balu Perumal (listen to him talking about forests above), and discuss hill slopes and saving the Sabah Bornean benteng.

Listen to us dissect this and other environmental news on BFM Radio 89.9 (also below). All in our blog.

We look back at environmental news and issues of the month that was. Every last Monday of the month 3.30pm-ish on 'Earth Matters', BFM Radio 89.9.